It is important to look for alternatives to traditional aviation due to climate change and limited oil reserves. About 100 years ago, airships, which were often called zeppelins in Germany, were the only aerial transport mode way to quickly travel long distances. The development of ultra-light, efficient, and flexible thin-film solar cells could lead to a renaissance of this technology and rejuvenate travel by Zeppelins. Such solar cells have been developed, for example, in the last few years at the Chair for Materials in Electronics and Energy Technology at FAU.

The aim of this research project is to simulate how fast an emission-free modern airship can fly and cover greater distances between city pairs. Modern techniques such as new thin-film solar cells and ultra-light batteries, as well as precise knowledge of different winds in the earth’s atmosphere, are to be applied. Such techniques and accurate forecasts about winds not only allow emission-free flying but also allow faster flying with airships than 100 years ago.

In order to prove this, the calculation of an optimal flight route is essential. Here, algorithms from computer science, such as the well-known Dijkstra algorithm, have to be combined and expanded with other algorithms. This was carried out in a research project with the students Stefan Wagner, Benedikt Schröter, Sören Koenen, Christopher Newman, Kai Teichmann and Armin Bundle.

One of the research results was the calculation of the flight time of an airship from Frankfurt to New York and back on an August day. The flight times were 78 hours for the outbound flight and 53 hours for the return flight. These are only 3 or 2 days. This is completely sufficient flight time for the transport of many goods but is also an interesting alternative for passenger transport. The flight would be emission-free, with no space confinement for passengers, and low flight costs. 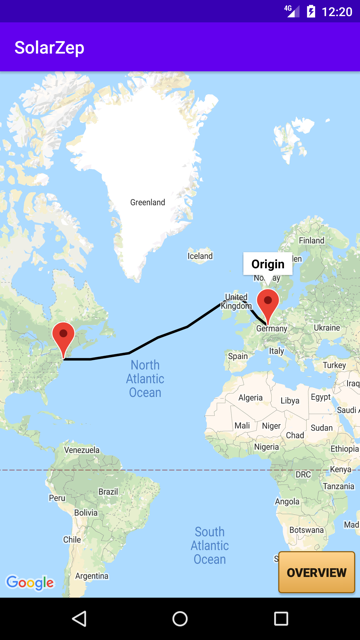 Flight route from Frankfurt to New York and back

The flight data determined for this route can be easily displayed in the app: 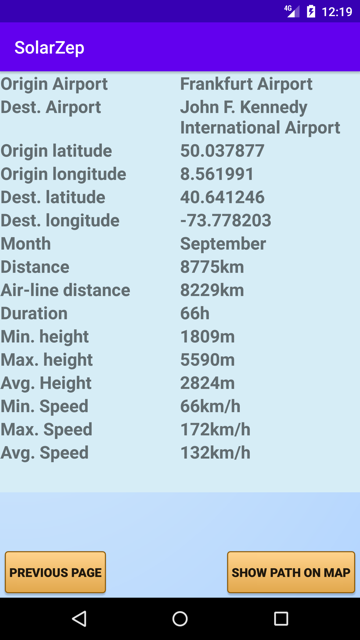 Here an airship with the following technical data was assumed, which is similar to the airship Hindenburg:

Individual travel times can be determined on the following App:  SolarZep

This App sends simulation requests to a computer at Friedrich-Alexander Unversität Erlangen-Nürnberg. The simulation results of the optimal route calculation can be  downloaded by the App.