If you are using this library than please send me an Email.

A first adaptive version of EXPDE will be available at the end of this year.

The development of the library is still in progress.
Therefore suggestions for improving the library are  welcome.  The library can be compiled with

For the parallel version of EXPDE you need MPI.
Here are some versions of MPI, if you want to install MPI:

The efficiency of EXPDE is based on

Example 1: Parallelization of a cg-solver with multigrid preconditioning for an elasticity equation.

In this example the elasticity equation with Neumann boundary conditions is discretized with linear elements on a semi-unstructured grid. The resulting equation system is solved by cg with a multigrid preconditioner. The following table shows the computational time for one cg-iteration on different meshes and for different number of processors on ASCI Blue-Pacific:

For decreasing the computational time, it is important to avoid the “cache problem” of the computer. To this end, we used a suitable data structure and expression templates. By using expression templates, it is possible to reduce the number of iterations over the discretization grid without a complicated hand optimization of the algorithm. Let us explain this by the following example:

Example 2: One part of the Stokes operator.

For solving the discretized Stokes equation by a multigrid preconditioner one has to evaluate the following system of Laplace operators:

There are two versions for implementing this system by EXPDE:

is the domain from here. Furthermore, we used a Ultra 10 SUN workstation).

Example 3: Solving Stokes equation by cg and a multigrid preconditioner

The code of this example can be found in the handbook. The following table depicts the storage requirement with respect to the size of the grid:

Example 4: Example of a semi-unstructured grid:

The tetrahedrals near the boundary do not have large interior angles. Therefore, the theory and numerical results show optimal approximation properties for semi-unstructured grids. 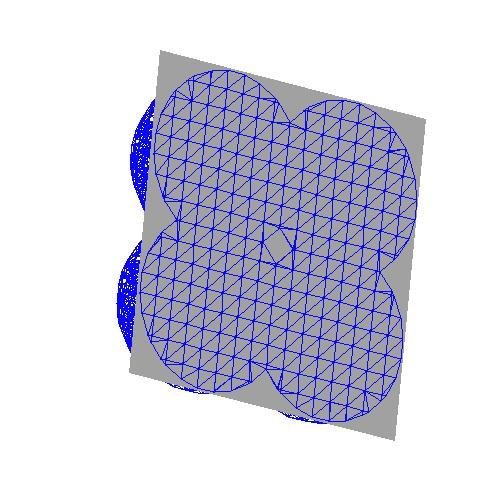